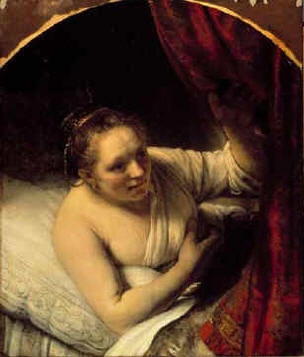 1589, Rembrandt’s parents marry in the reformed Pieterskerk in Leiden. Father: Gerritsz van Rijn [the river Rijn]. He was the only member of his family who converted from Catholicism to Protestantism (+1630). Mother: Neeltgen Willemsdr. van Zuytbrouck, daughter of a baker (+1640) 10 children , two died in infancy. Rembrandt was the 8th child. In 1640, 4 children were still living: a shoemaker, a baker, Rembrandt, and a daughter

1620, May 16, enrolls in the University (2 months before his 14th birthday). Already attending Latin school The school trained their students in grammar and rhetoric. Lessons were based on classical literature. Rembrandt received a thorough grounding in classical and biblical stories. In 1625 the States of Holland standardized the curriculum. Possibly, there were political reasons for not pursuing an academic career; there are other reasons as well, such as obtaining student privileges, freedom from civic guard duties and a specified allowance of tax-free wine and beer.

1619-1622 (13-16 years) apprenticed to Jacob Isaacszoon van Swanenburgh (1571-1638). A Catholic and his father was burgomaster 5 times and held other major town offices. The rest of the family was Remonstrant. They were removed from civil office by prince Maurits in 1618. Swanenburgh had been in Italy from about

1600-1617, painting in Venice, Rome and Naples. He married a Neapolitan woman. A few fantasies have been preserved but none of his portraits and cityscapes. There are no discernible traces of his influences in R’s oeuvre. That R. studied with Swanenburgh is known from a biography written by the Leiden burgomaster in the 2nd ed of his description of Leiden. R. studied with him for about 3 years.

1625-1631, Rembrandt sets up as an independent painter in Leiden, living at home with his parents.

1628, the humanist Arnout van Buchell mentioned R in his notebook

1631, commutes to Amsterdam, stays at house of Hendrick Uylenburgh, and uses studio space there for portraits. (Rembrandt lends him 1000 guilders)

1634, he marries Saskia Uylenburgh (1612-1642) in Friesland. She is the cousin of Rembrandt’s landlord and the daughter of the late burgomaster of Leeuwarden. They live in the house of H. Uylenburgh R becomes an Amsterdam citizen and joins the local St Luke’s guild

1639, moves into the “Rembrandt house” in the Anthonisbreestraat

1649, R and Dircks have problems, breach of promise, R ordered to pay maintenance allowance of 200 guilders

1650 Rembrandt has Dircks detained in the Gouda house of correction

1656, he transfers his house to his son Titus in order to save his inheritance. The liquidaton of R’s property. Inventory of goods taken. R couldn’t remarry because he risked losing income from Saskia’s estate. (Reason given was “losses in business as well as damage and losses at sea.” Explained variously. 1) he invested in cargo that was lost at sea, 2) his pictures were lost at sea.

1658, leaves St. Anthonisbreestraat, moves to the Rozengracht area. Many other artists living in that area

1660, Stoffels and son Titus set up a business partnership for dealing in pictures and works of art and they make R their employee

1668, Titus marries Magdalena van Loo, daughter of a silversmith, but Titus dies soon after, buried in the Westerkerk Rembrandt is living with Cornelia, Hendrickje’s daughter

1669, March 22, Rembrandt’s granddaughter is baptized. October 4, dies and is buried in the Westerkerk in an unknown rented grave