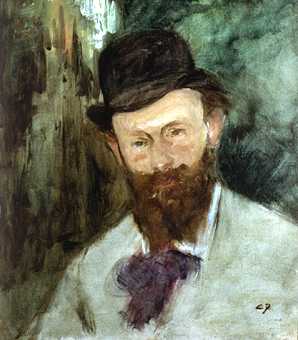 French painter Édouard Manet became the leader of a rebellious faction of young artists when he challenged the established artistic community in France. With its bold brush strokes and realistic portrayal of everyday events, Manet’s work served as a forerunner of the impressionist movement.

Manet, Édouard (1832-1883), French painter, whose work inspired the impressionist style, but who refused to so label his own work. His far-reaching influence on French painting and the general development of modern art was due to his portrayal of everyday subject matter; his use of broad, simple color areas; and a vivid, summary brush technique.

Manet was born in Paris on January 23, 1832, the son of a high government official. To avoid studying law, as his father wished, he went to sea. He then studied in Paris under the academic French painter Thomas Couture and visited Germany, Italy, and the Netherlands to study the paintings of the old masters. The Dutch painter Frans Hals and the Spanish artists Diego Velázquez, and Francisco de Goya were the principal influences on his art.

Manet began to paint genre (everyday) subjects, such as old beggars, street urchins, café characters, and Spanish bullfight scenes. He adopted a direct, bold brush technique in his treatment of realistic subject matter. In 1863 his famous Le déjeuner sur l’herbe (Musée d’Orsay, Paris) was shown at the Salon des Refusés, a new exhibition place opened by Napoleon III following the protests of artists rejected at the official Salon. Manet’s canvas, portraying a woodland picnic that included a seated female nude attended by two fully dressed young men, attracted immediate and wide attention, but was bitterly attacked by the critics. Hailed by young painters as their leader, Manet became the central figure in the dispute between the academic and rebellious art factions of his time. In 1864 the official Salon accepted two of his paintings, and in 1865 he exhibited his Olympia (1863, Musée d’Orsay), a nude based on a Venus by Titian, which aroused storms of protest in academic circles because of its unorthodox realism.

In 1866 the French novelist Émile Zola, who championed the art of Manet in the newspaper Figaro, became a close friend of the painter. He was soon joined by the young group of French impressionist painters, Edgar Degas, Claude Monet, Auguste Renoir, Alfred Sisley, Camille Pissarro, and Paul Cézanne, who were influenced by Manet’s art and who, in turn, influenced him, particularly in the use of lighter colors and an emphasis on the effects of light. Manet served as an officer in the French army from 1870 to 1871, during the Franco-Prussian War. He did not gain recognition until late in life, when his portraits became much sought after. In 1882 one of his finest pictures, The Bar at the Folies-Bergère (Courtauld Institute and Galleries, London), was exhibited at the Salon, and an old friend, who was then minister of fine arts, obtained the Legion of Honor for the artist. Manet died in Paris on April 30, 1883. He left, besides many watercolors and pastels, 420 oil paintings.